All around the world 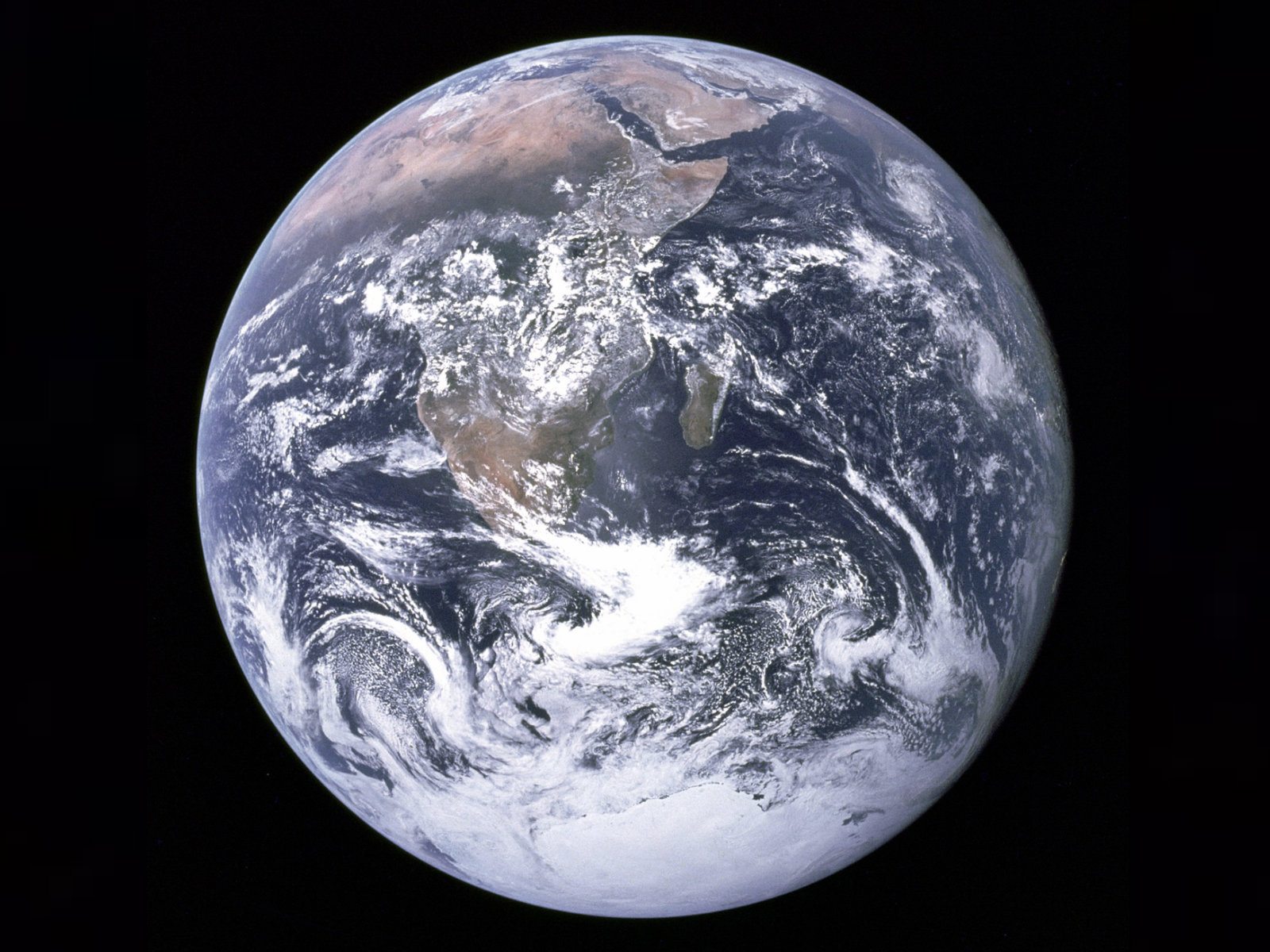 One of the key underpinnings of a successful economy is effective central bank management.

Central banks are tasked with devising monetary policy to promote full employment and maintain stable inflation (most central banks see around 2% as a good level). They seek to achieve their aims by moving interest rates and adjusting the money supply.

This year four of the largest central banks have shifted their stance away from policy tightening to policy easing. The US’ Federal Reserve (Fed), the European Central Bank (ECB), the Bank of Japan (BoJ) and the Bank of England (BoE) have all concluded that additional support for their economies is merited.

In this article we look at the economic environment in a little more detail to understand the challenges faced by central banks and how similar policies are being deployed, albeit to different effects.

The key issue facing Europe is sluggish economic growth.  The ECB has strived to stimulate economic activity by cutting interest rates, eventually reaching zero, and by expanding its balance sheet. Over €4.7trn has been deployed to purchase bonds through the process commonly known as Quantitative Easing (QE). In the graph below we can see that, while QE helped to stabilise the European economy in the immediate aftermath of the 2008 financial crisis, in subsequent years the economic growth has been unable to regain pre crisis levels:

Source: Bloomberg, data as of November 2019.

Economic management in Europe does however look as if it is about to change due in large part to a change of President at the ECB. In November, previous President Mario Draghi handed the reins over to Christine Lagarde. Lagarde is an unconventional appointment with a background not within central banking but international politics. In a change of style, she is expected to foster greater cohesion between the member states. Her plan appears to be to promote fiscal stimulus as a way of generating growth and inflation. However, there is resistance most notably from Germany which maintains large budget and trade surpluses. German citizens are not eager to use their savings to support what they view as ‘profligate’ spending in other European economies, even though they are part of the same union.

A more comprehensive review of Europe can be viewed here.

Across the pond our friends in the US enjoy stronger growth and modest inflation but concerns about weakening activity have surfaced. Tightening of monetary policy by the Fed and worries about trade have moved centre stage.

At one level the economic indicators point towards the economy being in a strong position. Unemployment is currently 3.6%, its lowest rate since the 1970’s. Inflation is 1.8%, marginally below the target of 2%, while real personal income growth is ahead of inflation at 3.1%. In addition, the US stock market continues to reach all-time highs!

However, the trade tariff war with China has created a lot of uncertainty for businesses all over the globe, not just the US. Purchasing Managers Indices (PMI) act as a leading indicator for overall economic activity within a region and we can see from the chart that the data for manufacturing doesn’t look promising – a number above 50, the horizontal line, is indicative of expansion and a figure below 50 signifies contraction.

Source: Bloomberg, data as of November 2019

Rate cuts are not normally controversial, politically, but the Fed is having to prove that it remains immune from the influence of US president Donald Trump. He has consistently tweeted about his displeasure over the Fed’s monetary policy stating that they are putting the US at a disadvantage. His latest remarks are shown below: 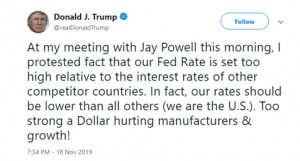 Trump wants the Fed to implement more supportive policy by cutting rates further, to ensure the economy is as strong as possible in the lead up to the 2020 Presidential election. However, in its latest set of minutes the Federal Open Market Committee restated their independence, making it clear that the future path of interest rates will be dependent upon economic developments. This is intended to send a strong message that the Fed will not be swayed by politicians with potentially dubious motives.

The BoJ are confronting many of the same issues as Europe. They are struggling to stimulate inflation and growth is unimpressive. However, they face a much bigger headwind, a rapidly ageing society. Ultra-low interest rates have been present in Japan for much longer than in any of the major developed economies. Unfortunately, despite the boost that this can bring, faster growth has remained elusive.

Today, interest rates are in negative territory, – 0.1%, and their QE programme has been targeted to ensure bond yields don’t exceed 0%. As a result, the Bank’s balance sheet has swollen to £4.2trn, which equates to 104% of the country’s GDP.

After 10 years of QE it isn’t surprising that doubts on whether it will deliver the desired effects are emerging. This has led to a rethink from the BoJ. For example, their QE purchases are now specifically at the short end of the bond market. They want a steepening of the yield curve in order to encourage Japanese banks to lend more money (they have surplus capital sitting invested in short dated bonds). This means that a greater quantity of shorter maturity bonds is purchases by the BoJ as shown in the table below:

The government, under Prime Minister Shinzo Abe, recognise that monetary policy alone is not enough for the current challenge and will not be enough for the economy to escape disinflation. Therefore, he has implemented a set of economic reforms referred to as ‘Abenomics’. The reforms are created by three ‘arrows’. The first arrow employs QE. The second increases government spending and is aimed at stimulating demand. The third is the reform of multiple rules and regulations allowing Japanese industries to become more competitive encouraging greater investment into the private sector.

And finally, we come back to the UK. The BoE remains the outlier of the four central banks reviewed. Our central bankers have decided not to adjust monetary policy at this point.

In several respects UK economic fundamentals paint a similar picture to what is happening in the US. Inflation is low at 1.5% and positioned slightly below the Bank’s target of 2.0%. Unemployment is 3.8% (the lowest level since 1975) and real wage growth is positive.  However, manufacturing PMI data, is far from rosy, again similar to the US. Currently, the UK manufacturing and services sectors have measures lower than 50, a level which implies contraction.

Unlike the Fed, the BoE is reluctant to cut interest rates, preferring to “keep its powder dry” until there is greater clarity around the course of Brexit. The General Election, scheduled for December 12th, should remove some of the uncertainty but a lot depends on whether a single party can secure a majority.

Many economists think the best outcome is clarity, one way or the other, on the future direction of the UK’s relationship with the EU. Settling this matter should release pent up demand and give a welcome boost to the economy. Moreover, all political parties are gearing up for fiscal spending and this will add more firepower to the economy.

The spending promises from the Conservatives and Labour are mounting up and further information on their pledges can be found here.

However, despite monumental monetary stimulus, the four major central banks find themselves below their growth and inflation targets.

For some commentators the policies deployed by Central Bankers have been ineffective. This is possibly unfair because the current turbulent political landscape has recently acted as a strong headwind, clouding decision making for both businesses and central banks alike.

If some resolution on trade wars is possible and we get greater clarity on Brexit a new chapter could be written; one based on prolonging the current economic cycle, stoked by central bank support and augmented by fiscal spending.