As Safe as Houses? 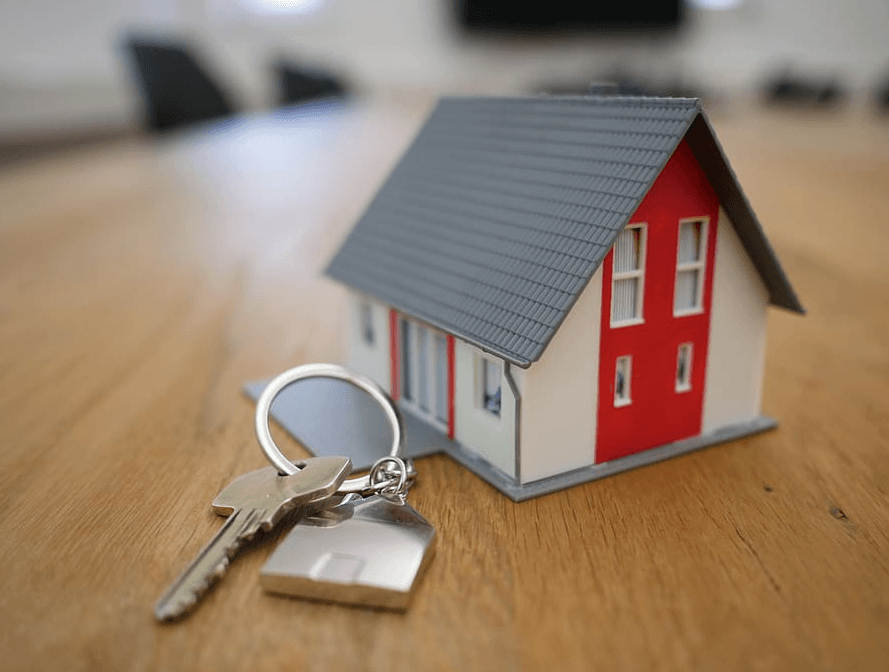 The 2009 financial crisis is generally considered to have its roots in the US sub-prime housing market. A combination of reckless lending, complex mortgage-backed financial instruments and complacency created a perfect storm.

Some of you may recall how evidence of irresponsible lending practices surfaced afterwards. Stories from the US emerged about mortgages granted to NINJA’s – a rather nasty acronym for No Income, No Job and No Assets. These loans were inherently unaffordable.

The UK mortgage market did not escape the madness either. Loans for 120% of the value of a given property were granted to people who ‘self-certificated’, a process replacing proof of salary. It was a time of collective insanity with banks securitising (packaging) loans and investors buying them without knowing the risks. The downturn that ensued engulfed global markets. Land and property values collapsed, credit dried up and unemployment followed.

More than 10 years on recent housing data indicates US and UK prices have recovered, with values continuing to rise, albeit following a slightly different trajectory. An assessment follows whereby we look at the US and UK house market conditions in more detail. Later in our article, we review the market conditions prevailing before the collapse of both housing markets and the differences with the present environment. We finish with our conclusions.

According to the latest figures from the US Census Bureau, the number of new single-family houses under construction rose to the highest level since 2006. The 1.6 million monthly increase in December represents a spike of 17% from November’s level and a vast 41% jump year on year.

Likewise, rates of construction for multi-family buildings (i.e. apartments) had a similarly positive increase of 30%, reaching the highest figures since 1986.

The surge in house building is evidence of renewed confidence and adds to supply. However, the rate of growth should not be taken as an example of speculation. Instead, it reflects the robust final demand for new homes.

The blue bars in graph 1 depict the change taking place in a widely used US house price index. The starting point is November 2018 and the index continues through to November 2019, the latest figures available.

The solid orange line is the percentage rate of increase of the blue bars, allowing us to gauge the rate of growth. We can see that house price appreciation is modest. However, as mentioned, supply is increasing at a rapid rate, fuelled by growth in new construction. If the supply of new homes were swamping demand prices would be falling not rising. The fact that demand exceeds supply suggests further value gains are likely, and the modest growth in house prices suggests sustainability. 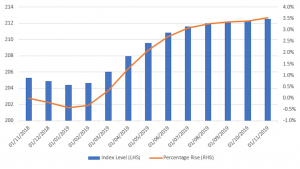 Source: The Federal Reserve Bank of St Louis and the S&P/Case–Shiller U.S. National Home Price Index, data as of November 2019.

The positivity currently permeating the US housing market is due to the interplay between a few, important macro-economic and micro-economic dynamics:

The confluence of these factors supports mortgage affordability, allowing would-be property owners to gain a foothold on the housing ladder.

The contrast between the UK and US markets across the period examined in Graph 1 is stark. Instead of the gains observed in the US, the UK housing market recorded twelve consecutive months of declines between December 2018 and November 2019. Brexit uncertainty and wider trade tensions crimped sentiment and confidence in the UK declined. Forecasts from official sources warning of falls in property values if the UK left the EU with ‘no deal’ did not aid the market.

However, from the data available December 2019 marks a turning point. House prices registered their first monthly rise of 0.1% in a year and, while undoubtedly modest, this rise was followed by an acceleration of house price growth to 0.5% in January. On an annual basis, the picture is even brighter. Prices have risen by 1.9%, the highest annual rate for 14 months.

The market dynamics which have buttressed the US market are also present in the UK:

In short, the overall environment for UK housing is similarly constructive and should grant property owners some degree of respite.

What is different this time?

Since the crash, market participants have listened intensely for anything which might resemble alarm bells, fearing a repeat of the severity that followed the bursting of the property bubble. So, how worried should we be? Should we be worried at all?

A pessimistic observer will point to low-interest rates as a potential danger. They will feel compelled to argue that if interest rates rise it will be calamitous for borrowers. We know that if mortgage costs go up dramatically borrowers find it more difficult to cover the cost and some will default.

Graph 2 below shows this happening in the lead up to the housing crisis in 2007. The orange line displays the US’ main benchmark interest rate, whilst the blue line shows the rate of US mortgage delinquencies (a term meaning you are not able to afford your mortgage).

Graph 2: US Federal Funds’ Rate and US Mortgage Delinquency Rates. 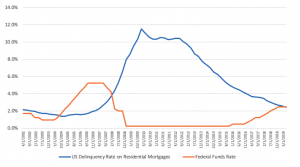 Source: The Federal Reserve of St Louis and Bloomberg, data as of July 2019

From the graph, we can observe that US interest rates reached a level of 5.25% by the second quarter of 2006. Afterwards, the rate of mortgage borrowers failing to pay their interest payments begins to pick up from the third quarter of 2006 onwards.

However, if we look further to the right at more recent conditions, the picture presented by the graph is very different and much more reassuring. The rate of delinquencies is trending downwards. Yes, interest rates have risen from their previous floor, but the US Federal Reserve (the Fed) has signalled its commitment to maintaining low rates for as long as inflation remains below its 2% target. This is important for affordability. Mortgage costs appear anchored against inflation which the Fed regards as tame (and even lacking) for the foreseeable future.

Other factors must be considered. For a start, the macro-economic environments today are very different. As a reminder:

Conditions for both the US and UK housing markets remain supportive.

A repeat of the calamitous market disruption that followed the housing market crash is unlikely.