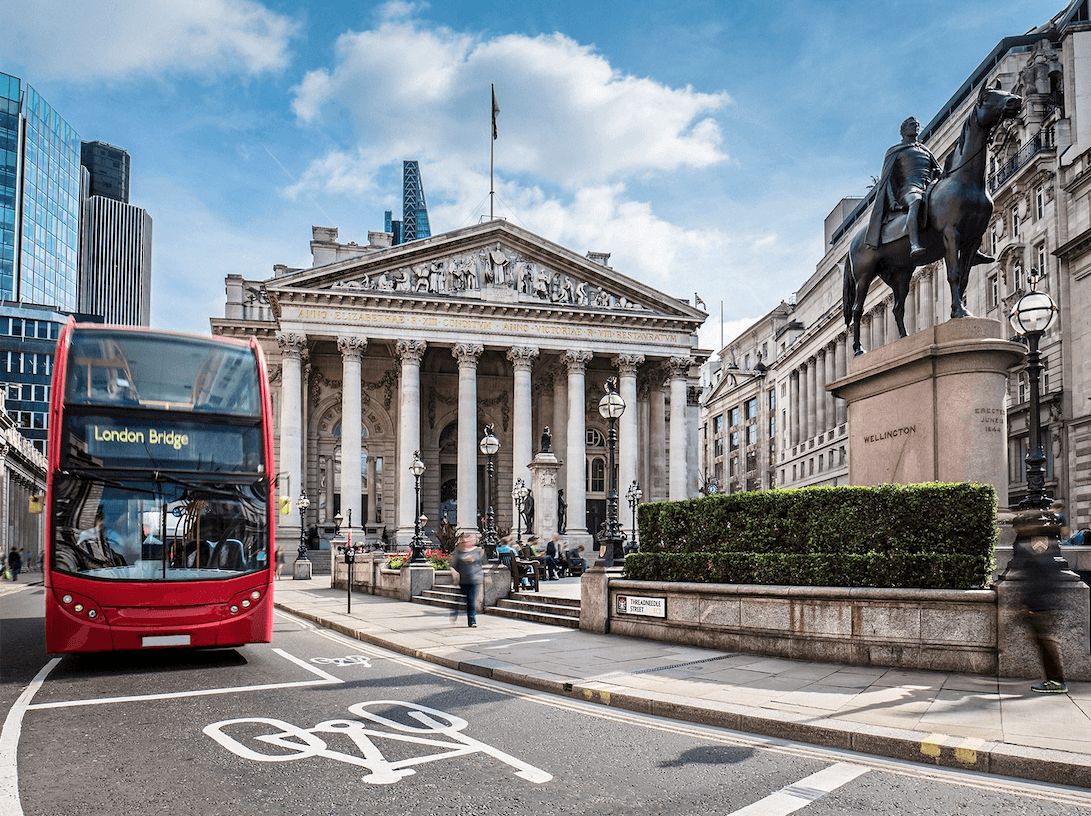 In recent weeks, the World’s four leading central banks- the US Federal Reserve (The Fed), the Bank of Japan (BoJ), the European Central Bank (the ECB) and the Bank of England (the BOE)- updated their guidance and announced their policy prescriptions for the next quarter.

They are aware that risks 1 and 2 impacted business sentiment severely last year, particularly trade data, justifying their decisions to cut interest rates and reintroduce quantitative easing (QE). Such actions, along with the abatement of some significant headwinds, have benefitted all four economies. We can see this from the graph of purchasing manager intentions which acts as a good barometer for future activity. 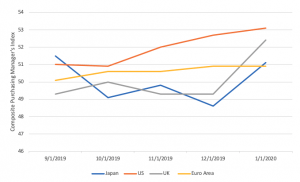 The monthly PMIs for each economy all now indicate expansion (above 50). In the case of the UK and Japan we are seeing a shift from outright contraction, in evidence last year (below 50), to a position where the outlook is improving and reflecting expansion (above 50).

Turning now to the statements and decisions of the central banks. The statements and policy prescriptions tend to be lengthy so we thought a  summary of the key aspects would be helpful. When it comes to central banks, the language they choose to use is deliberate. They are sending signals because they are intent on changing behaviour. We therefore provide our interpretation of their signals. Below we begin with the largest and most influential of them all, the US Federal Reserve Bank, and we offer our view their intentions.

All ten members of the US Federal Reserve’s Open Market Committee voted to leave its benchmark Federal Funds’ Rate target unchanged at 1.5% – 1.75%.

The Fed’s post-meeting statement cited moderate consumer spending growth, strong employment data, and low inflation. Each one is a positive sign for the US economy.

The Fed noted that the factors which caused them to cut rates three times in 2018 had largely dissipated, following the signing of the US-China Phase One deal, and signals that global manufacturing data has bottomed out.

However, the Fed highlighted some weaknesses, such as exports and low capital spending from US businesses. Fed Chairman Jay Powell indicated whilst Fed policymakers felt comfortable with their present positioning, if rates were to change over the coming months they would likely fall, given US inflation remains below its 2% target.

Our view: The Fed is poised to act by cutting rates again if more stimulus is needed.

The BoJ has possibly the most difficult role of any of the four leading central banks. They are confronted by chronic deflationary pressures from an ageing population and stagnation that has afflicted the Japanese economy since their asset price bubble burst in the early 1990s.

The BoJ has left its policies unchanged, maintaining short-term interest rates at -0.1%, continuing with its ¥80 trillion (around £560 billion) quantitative easing programme and guiding yields on government debt to 0.0%.

Our view: The BoJ is gaining confidence that the government policy prescription is working. They are however not being complacent and continue to assist with supportive monetary policy. 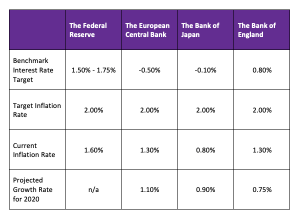 Sources: The United States Federal Reserve; the European Central Bank; the Bank of Japan; and the Bank of England. Data as of the 31st January 2020

New President Christine Lagarde is now firmly in the driving seat, and last week the ECB announced it would keep the supportive monetary architecture designed by Mario Draghi in place to drive inflation up in the euro-zone toward its 2% target.

Despite some stabilisation observed in Eurozone economic data, at 1.3% the inflation rate remains some distance away from its target.

The ECB Governing Council kept the refinancing rate, which determines the liquidity of the euro area’s banking system rate at -0.5%. Lagarde indicated the rate would remain anchored at this level for some time, whilst reserving the right to cut further if economic conditions worsened. The bank’s commitment to purchasing €20 billion a month through its quantitative easing programme was reaffirmed.

A broad review of the ECB’s strategy, to take account of the structural changes that have occurred within the global economy since the ECB was established in 2003, is underway. The review is expected to incorporate considerations of the economic impact of climate change and a reassessment of whether the ECB’s target inflation rate of 2% is still appropriate for present economic conditions.

Our view: More work is needed. The new ECB president will continue to apply pressure and lobby politically for fiscal spending to be stepped up; whilst maintaining maximum ongoing monetary support.

Thursday’s Monetary Policy Committee (MPC) meeting marked the last of Mark Carney’s tenure as governor. Ahead of the meeting analyst expectations of a rate cut fell from around 82% to less than 50%, following economic survey data which detailed a post-election bounce in UK economic confidence and stabilising global growth.

The majority of the MPC concurred with at least half of market analysts, with members electing to hold the UK’s benchmark rate at 0.75% by 7 votes to 2.  However, the MPC downgraded its forecast for UK economic growth for the 2020 to just 0.80% from 1.2% previously. This highlights the scale of the challenge facing Chancellor Sajid Javid as he aims to restore growth rates to their pre-financial crisis level of 2.8%.

Committee members judged the low rate of productivity growth that has afflicted the UK economy since the aftermath of the Great Recession would likely continue. Accordingly, the MPC assessed the UK economy’s ‘potential supply growth’ to be 1.1%, which is a marked reduction from the 2.9% level recorded before the financial crisis. This means the level at which the UK economy grow can grow without inducing inflation is now 1.1%. In other words, if economic growth of 1.1% surfaces, some modest policy tightening could be necessary through interest rate rises.

Our view: We believe the lacklustre BoE assessment will reaffirm Chancellor Sajid Javid’s determination to restore UK GDP growth to previous trend levels of around 2.8%, and perhaps higher. This will take time, but fiscal spending will begin to kick in and business confidence will be restored

While the four central banks assessed have not changed course and have retained their supportive policies, we can infer some positives from their decisions and outlooks.  The statements emanating from this month’s meetings indicate that although some risks remain for the global economy (not least the coronavirus outbreak in China), they are much less acute than they were one quarter ago.

As mentioned above, the global economy’s prospects have strengthened and by deftly maintaining monetary support, central banks have potentially elongated the present economic expansion. However, with loose monetary support remaining, they have few policy tools to use should growth falter.

Presently, governments can borrow at exceptionally low rates and an intelligent application of fiscal policy could bolster growth and productivity, and allow monetary policy to normalise.