Divergence – The Economy & the Stock Market 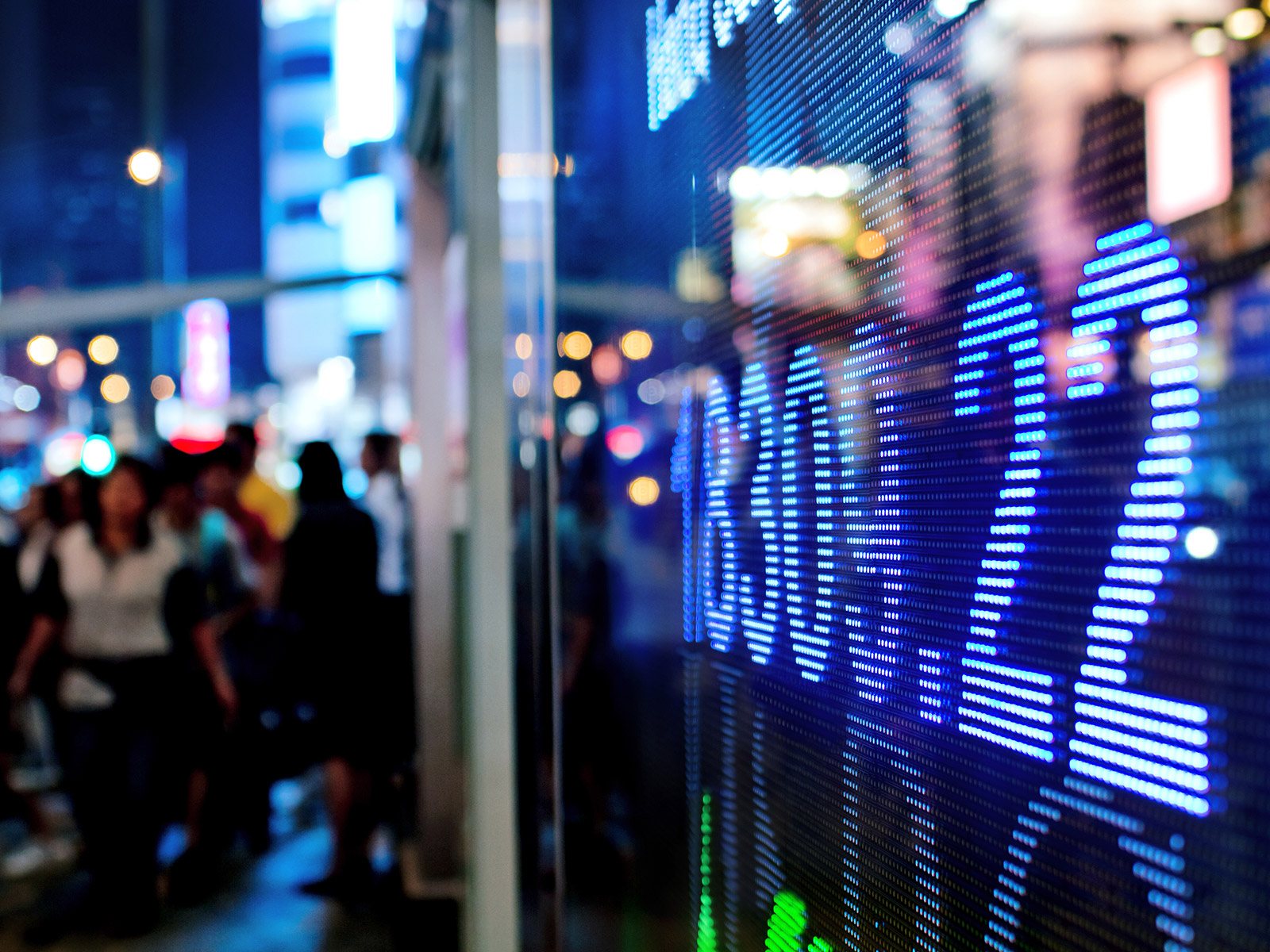 The onset of COVID – 19 necessitated the imposition of extraordinary measures to stem the transmission of the virus. Over the last eight weeks, vast swathes of the global economy have been placed in a state of suspended animation, with businesses and populations apparently ceasing nearly all activity. However, the performance of global equity markets in recent weeks seems to indicate investors are looking through the current adverse economic conditions.

Divergence between global equity markets and their underlying economies appears untenable and counterintuitive, but history tells us this is not unusual. There are many contributing factors that go some way to explain the present inverse performance of markets and the economy.

We will attempt clarify the underlying causes of the phenomenon, but first we will outline the present (mis)fortunes of 3 major economies.

Graph 1 below displays performance of several economies over the last five years, depicting the quarterly change in Gross Domestic Product of the US, EU and UK, adjusted for inflation. What can be observed is all three economies were progressing at a generally steady pace from the final quarter of 2015, with the US exhibiting higher growth, reflecting greater dynamism.

At the far right of the graph, all three economies plunge suddenly evidencing the strain placed on each by restrictions put in place to deal with COVID-19.

Graph 1 – Quarter on Quarter Real GDP Growth of the US, EU and UK 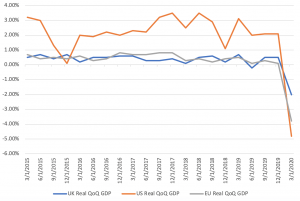 Using the US as an example helps illustrate the point. During Q1 of 2020, the US economy fell by 4.8% on annualised basis relative to the final quarter of 2019 and the economic toll shows no signs of abating, new claimants for unemployment insurance rising by millions each week, adding just under 3 million new claimants in the last week alone, displayed by Graph 2 below. For context, during the height of the Global Financial Crisis, the largest weekly rise in the total number of Americans currently claiming unemployment payments is now 36 million.

Between February 19th and the 23rd of March equity markets also exhibited significant downward momentum, with investors struggling to price in the implications of COVID-19 on earnings and future growth. Staying with the US, the benchmark equity index fell by 32% over that time period.

However, it has since recuperated almost half of those losses at a time of profound economic dislocation. The discrepancy between positive market momentum and extremely negative economic indicators is jarring. An explanation follows.

Recent weeks have displayed equity market performance does not always have roots in the prevailing productive capacity of an economy. As the above section indicates, if markets and economies were strongly correlated, global equities would not have enjoyed the resurgence observed in the last few weeks.

Some of the upward trajectory can be attributed to the extraordinary policies implemented by the US Federal Reserve and other central banks. The asset purchasing programmes, committing central banks to purchasing corporate bonds, allowed liquidity to flow to companies, and increased investor appetites for equities.

While the proximal cause can be assigned to corporate bond purchases, other factors influence equity prices.

That equity markets are forward looking is a point some of you may deem flagrantly obvious. However, it is worth reinforcing the reality that current equity prices reflect investors’ evaluations of how a company will fare over the medium term.

If we apply this framework to the present, it can go some way to explaining the fluctuations observed in markets since the beginning of the year. When the transmission of the virus was first detected, its effects were ambiguous. Market participants and governments, perhaps optimistically, were operating on the assumption the virus’ spread would be minimal, confined to a few concentrated geographic pockets.

As ambiguity receded and the full effect of COVID-19 became apparent, markets declined rapidly. The largest peacetime monetary and fiscal stimulus followed, allowing investors to legitimately conclude that earnings could rebound in the future.

This flip flopping can also work in reverse. A booming economy may not necessarily translate into surging equity performance. If investors believe that booming conditions are unsustainable and likely leading to a bust, they will sell.

Another determinant of the disparity between the performance of equity markets and their underlying economies is the global nature of some of the dominant constituents of equity indexes. Despite some unwinding of the interconnectedness of the global economy, publicly traded companies still operate in a largely globalised marketplace, selling goods and services across the globe.

Multinational firms can earn substantial proportions of their profits outside of their country of origin. Additionally, the operations of multinationals are generally dispersed across the global to lower costs and increase profits. Therefore, the value created by such operations won’t be captured in the GDP figures of the country in which a firm is listed.

Markets and economies do not always perform in lockstep over short- and medium-term periods.

Shifts in market expectations capture changing sentiment which, in turn, may not be reflective of what is happening now in economies. Governments and central banks play a large influencing role outside of business activity.

Many large companies are global and beneficiaries of economic dislocation; healthcare, technology and distribution businesses. Even as economies contract company values may rise, due to investors anticipating improvements to future earnings and economic fundamentals.