China’s Gross domestic product (GDP) grew 6.9% last year. China’s economy is doing better than generally expected but it is slowing. A slow down in the rate of growth is natural when you consider just how big the Chinese economy has become. Very high sustained economic growth rates tend to be associated with emerging economies producing significant improvements in per capita GDP i.e. the population getting richer and catching up with the developed world. China’s economy is now the 2nd largest after the US.

One of the challenges China watchers face is getting accurate data. Recently, the Financial Times noted that China’s national statisticians regularly distrust and thus discount local data. Local officials, so it is claimed, have a habit of inflating figures to look good. In fact, three regions in China actually admitted faking some statistics in 2016, inflating the outcome for that year. This leads western economists to believe that the economic growth figure for 2017 is distorted because the base figure at the end of 2016 used in the calculation is higher than it should be. In this context, growth in 2017 could be said to hide a better performance than implied by the figure of 6.9%.

While the picture is clearly very cloudy, other cross checks carried out on growth provide additional weight because they are more difficult to fudge. For example, numbers released on carbon emission and commodity imports have been rising to new record highs thereby confirming strong industrial output.

The ‘smooth’ economic growth picture presented by the Chinese financial authorities, and shown in the chart below, is very comforting for the Chinese communist party. They want to display a picture of orderliness because it feeds through into trading volumes on China’s volatile stock market and it indicates to the population at large that everything is under control. 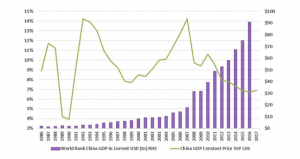 So at present we have an economic growth figure outpacing the government’s full year growth target of “around 6.5%”, and, probably, an economy growing faster than the 6.9% growth rate just announced (due to the wrong base number being used from the previous year). This means inflation is boosting company profits and driving better retail sales, industrial production and fixed asset growth. They are rising at 9.4%, 6.2% and 7.2%, respectively. One staggering statistic that caught our eye is the one announcing that 13 million new jobs were added over the last year bringing the unemployment rate to 4.98%.

Whether we will see continuous strong economic growth in China is hotly debated. There are real concerns about the credit stimulus which has fuelled growth. Debt levels are high and threaten stability. Therefore, it seems reasonable to assume the government will look to control borrowing going forward. This may curtail economic growth but output is still likely to be in line or better than the official target. With synchronised economic growth underway globally, China should continue to see high demand for its exports. This will help offset the countries debt pile and with inflation rising the real (inflation adjusted) value of debt will start to recede.