Tightening the Purse Strings – Consumption and Taxation in Japan

In life nothing is certain except death and taxes. In Japan, matters surrounding death and tax are complex. The population level is falling, and its inhabitants face higher tax on spending. This month the rate of consumption tax, the Japanese equivalent of our VAT, is rising by 2%, to 10%. Not great by any stretch of one’s imagination.

Fortunately, there is a silver lining. Despite two decades of economic stagnation Japan’s economy remains robust. Their position as the third largest economy on the planet is being sustained.

In our article below we explain legitimate concerns around the latest tax hike. We also set out some reasons why consumers are better placed to withstand an increase. By doing so we risk having the epitaph ‘this time is different’ etched on our gravestone, but we are willing to take that risk. Here’s why.

Japan’s consumption tax rate gets a lot of attention because the last increase, from 5% to 8%, proved disastrous. The hike caused a massive hit to consumer spending, rapidly weakening the economy. Ironically, the government of Shinzo Abe were confident that raising revenues would be good for the financial position of the country, because of the need to pay for the spiralling healthcare costs that come with a rapidly ageing population.

After bringing in the tax Japan’s economy faltered, contracting by 1.9% in Q4 of 2014. This unexpected consequence caused a dramatic rethink and a shift in political opinion. A general election forced the re-elected government to introduce growth oriented economic policies. Confidence was restored and the economy rebounded.

With hindsight the decision to hike tax was questionable. Whilst this may seem self-evident, at the time there were justifiable reasons for the increase. Economic growth was robust in the year prior to the tax rise, as the effects of Prime Minister Abe’s economic policies (dubbed Abenomics) began to transmit to the wider economy, and the rise was viewed as way to place Japan’s fiscal situation on more stable ground.

The calamitous events in 2014 show why economists are worried again. Will the latest increase from 8% to 10% cause history to repeat itself? Are the government making the same mistake twice?

We think not. Why?

First, Shinzo Abe’s painful memories about what happened last time persist. A repeat will be akin to shooting oneself in the foot. Voters will object, again putting pressure on the government.

Second, an incentivisation scheme to mitigate negative consumer behavioural tendencies has been introduced. A cash-back scheme gives consumers rebates of 2% if they pay electronically rather than use cash. This initiative supports the government’s secondary aim to promote a shift toward more efficient e-payments.

Third, Japan host the 2019 Rugby World Cup during the initial period of the tax coming into effect. Large-scale global sporting events have been shown to promote consumption with transmission through tourism and the wider services industry. Japanese GDP should receive a boost of around ¥217 billion, or £1.65 billion.

Finally, food is exempt from the increase. Food is a non-discretionary and by helping those households with low levels of surplus income the government are easing the burden on the less well off. They can continue to spend on enjoyable pursuits, helping the wider economy.

Why risk an increase now?

There are strong structural arguments for making fiscal spending sustainable over the long term. One of the most important reasons is the ability to strengthen the economy overall.

A key outcome from the tax rise is, at least partly, reducing the large public sector debt pile over time. Japan famously has one of the largest debt burdens of any economy, by spending more than they raise in tax. Government debt is 234% of Gross Domestic Product (GDP). To put this into context, the percentage of UK’s Government debt to GDP is 86%.

Japan’s rapidly ageing population, with life expectancy among the highest on the planet, is a real societal problem. However, notwithstanding the accompanying issues, increased longevity can be viewed as a measure of success. The fact that the average Japanese citizen can now expect to live well into their eighties is emblematic of the country’s great wealth and sophisticated social systems.

However, the rising median age of a Japanese citizen dictates there will be fewer workers in the future to support the provision of welfare programmes for young and old alike. Graph 3 below shows how the median age of Japan’s population is projected to increase to 54.7 by 2050. This half the population will be older than 54.7 years of age, increasing the burden on the diminishing proportion of the population who are of working age. 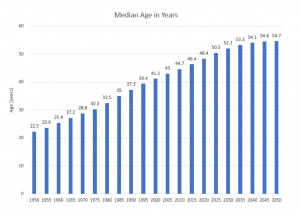 Fortunately, falling unemployment is stimulating wages and prices are firming. It may seem strange to say price inflation is good. For Japan it is essential. Why? Well, in the past price deflation and sluggish wage growth has actively discouraged spending, which are principal causes of economic stagnation; if consumers and households believe that prices will fall and incomes aren’t rising, they will delay purchases believing goods will be cheaper in the future.

Japan’s policy makers acknowledge the problems they face. To ignore them now would lead to an even bigger problem in the future. Injecting greater fiscal prudence into Japanese society while offering targeted fiscal support should be beneficial in the long run. This latest and more considered approach to raising tax will hopefully lead the economy to follow a more sustainable growth path. This time should be different.

Please be aware that this communication should not be considered financial advice.