The Great Trans-Pacific Trade Off

In the media every new day starts with a blank page. However, with Donald Trump in the White House there is no scratching around for news to fill blank pages. News of trade wars are making financial headlines, daily. Behind the scenes, and the rhetoric, there are some serious initiatives to try and tackle what has become a deeply embedded problem – the growing US deficit.

We have been following each new announcement, posting updates over recent weeks and giving you our thoughts as the situation progresses. Early last month we wrote about Trump’s administration imposing tariffs on both Steel and Aluminium. This released shockwaves globally but most noticeably it shocked China, the leading producer of steel.

Earlier this week, China unveiled its retaliatory measures, proposing tariffs on 128 US produced goods and overnight and already anticipated, Trump’s administration came up with an extended list, applying a 25% tariff on 1,333 Chinese products, ranging from industrial robots to mirrors. 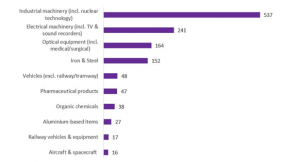 Source: Bloomberg, Office of the US Trade Representative. Note: HTS categories exclude certain products as listed in the full chapter description on the US International Trade Commission’s website

China’s Vice Finance Minister Zhu Guangyao and Vice Commerce Minister Wang Shouwen gave a briefing on Wednesday refining their previous announcement, reducing the number to 106 reciprocal tariffs on US goods but now including the main US exports to China such as soyabeans, vehicles and aircraft.

This updated list of targets amounts to $53 billion (against $3 billion initially) of goods imported last year from the US, virtually matching the value of the US proposed list of 1,333 Chinese goods.

The countermeasures from China were not greeted warmly. Trump responded saying “in light of China’s unfair retaliation” he was instructing the Office of the US Trade Representative to consider additional tariffs, this time on an additional $100 billion of imported Chinese goods (taking the totals to $153B).

This latest move by Trump makes it difficult for China. They responded saying “we will follow suit to the end and at any cost” and use “new comprehensive countermeasures to defend firmly the interest of the nation and its people”. However, as the chart makes clear below, China does not import enough US goods to match the latest Trump proposal of $153 billion in total!

China’s Imports of US Goods

How does this affect other trading nations?

While offensive manoeuvres by the US on tariffs create a defensive Chinese response, the knock-on effect may benefit those not caught up in the spat. For example, the US exports $13.9 billion worth of soyabeans and if they do not supply China, then Argentina, as the world’s biggest exporter of soyabean meal and oil, could potentially benefit.

Similarly, tariffs on US vehicles and aircraft may increase demand for more exports from European makers such as BMW, Volkswagen or Airbus. It is not so surprising that we are only seeing news surrounding the two principal antagonists while others sit quietly waiting for oppertunities to increase their exports.

There is a great deal of rhetoric and uncertainty about trade right now but one thing at least is clear; Trump has identified the problem, in his usual antagonistic style, explaining his logic in an earlier tweet shown below.

In any negotiation each party wants something. On Wednesday, the Trump administration indicated that it is willing to negotiate with China, easing investors’ fears of a full-blown trade war. US Commerce Secretary, Wilbur Ross, said the US is not entering “World War III” and noted that “even shooting wars end with negotiations” but then on Thursday Trump suggested additional tariffs on further $100 billion of goods imported. Details of the trade-off will be interesting and may surprise us all. Keep watching this space.