The UK Bounce Back is Underway

Long-awaited optimism across the UK has returned. Retail and service industries have reopened, and restrictions eased. Friends and families can once again reunite.

This week UK economists began to anticipate stronger growth and lower unemployment. We look at the reasons why and put some numbers around the quantum of improvement expected.

The key contributor to increased optimism is the vaccine rollout in the UK. The speed of inoculations and efficacy of the vaccine has surpassed expectations.

The UK now has one of the highest vaccination rates in the world and is on track to have offered every adult a first dose by the end of July. Approval of the Moderna vaccine has eased concerns over future supply such that everyone under 30 will now be offered this or the Pfizer jab.

This week the EY ITEM Club, a group of industry experts who produce quarterly economic forecasts, released their Spring 2021 forecast.

In an upbeat assessment the ITEM club believe the UK economy will grow by 6.8% in 2021. This represents a significant increase from January’s report where they predicted growth at 5.0%. If they are correct the UK will emerge with far less damage than initially anticipated enjoying a rate of growth not seen since the Second World War.

The good news on growth is also evidently translated to jobs. Unemployment is now expected to peak at 5.8% this year – see table 2 below. This is a vast improvement from the 8-9% level predicted this time last year.

Employers around the country are beginning to reopen their doors creating a strong surge in job vacancies. By the third quarter of next year unemployment may fall below 5% helped along by the levelling up agenda and increased infrastructure spending.

Mims Davies, Minister for Employment, stated, “Another drop in unemployment, vacancies on the rise and over half a million people joining payrolls in the last month is welcome news as we continue on our road map to recovery.” 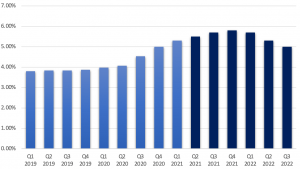 An economic recovery in the UK will clearly not be sustained without a resumption in consumer activity. Thankfully, in the first week of non-essential retail reopening, credit and debit card transactions increased sharply. An 8% surge in week 1 places spending at 91% of the comparable weekly average a year ago – see table 3. It is important to note the comparable period occurred before the Pandemic took hold.

A continuation of the rebound underway is an early indicator that the appetite from the British public to spend and consume is undimmed despite massive hurdles encountered by many citizens. 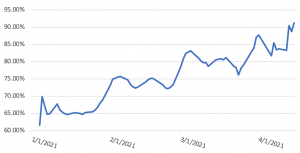 The EY ITEM club is not the only group forecasting better news. The Centre for Economics and Business Research (CEBR) estimate that almost half of all Brits will have seen an increase in their cash savings over the past year. They estimate that the British public have accrued a staggering £192 billion of savings since 23rd March 2020.

A large increase in savings is not confined to the UK. Economists currently believe that a high level of pent-up demand will be unleased globally as confidence returns. Savings they say will now give way to spending. This shift is of particular interest to businesses operating in different sectors. They wonder how they will fare as economies reopen.

One way to access spending intentions is to poll consumers – see chart 4. Polling is being targeted at those who have saved cash over the past year, with a view to determining where their excess savings will be spent.

Chart 4: What Are People Saving For? 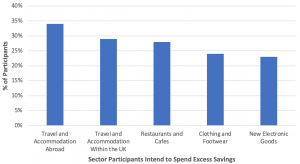 According to the participants we are a nation of people determined to holiday abroad!

Recent updated UK forecast data suggests a much quicker pace of growth than was anticipated only a few months ago.

The ongoing recovery will create more jobs and less unemployment; backed up by a desire and the means of the British people to go out and spend to support businesses.

After a year of grim media headlines, and doom-laden predictions, we must remember to celebrate positive news. The country is reopening, and a sense of normality regained.