To Boldly Go – A World Beyond Europe

Trade negotiations are often a lengthy process.  The Centre for Economic Policy Research estimate it takes on average 28 months to complete a single deal, but it is not uncommon for trade negotiations to take years. Long timescales are typical for trade deals involving Europe. For example, the Comprehensive Economic and Trade Agreement (CETA) negotiations between Canada and the European Union lasted seven years!

Despite these inordinately long timescales, throughout the last two years, the UK government has, often without much fanfare and during a global pandemic, managed to finalise 29 agreements. A noteworthy achievement.

We evaluate the scope of deals signed, their value, the potential for enhancements and take a brief look at how the negotiation between the UK and EU is proceeding.

Table 1 below (split into two sections with constituents listed alphabetically) summarises the free-trade agreements (FTA’s) signed. The FTA’s roll over the same terms agreed when previously part of the EU.

In total, the value of trade governed by all 29 agreements is nearly £158 billion; a significant sum.

The 29 deals negotiated by officials and ministers at the Department for International span cover the UK’s terms of trade with 58 countries. The terms of each agreement come into force from 1st of January 2021, the date of the UK’s official departure from the EU. 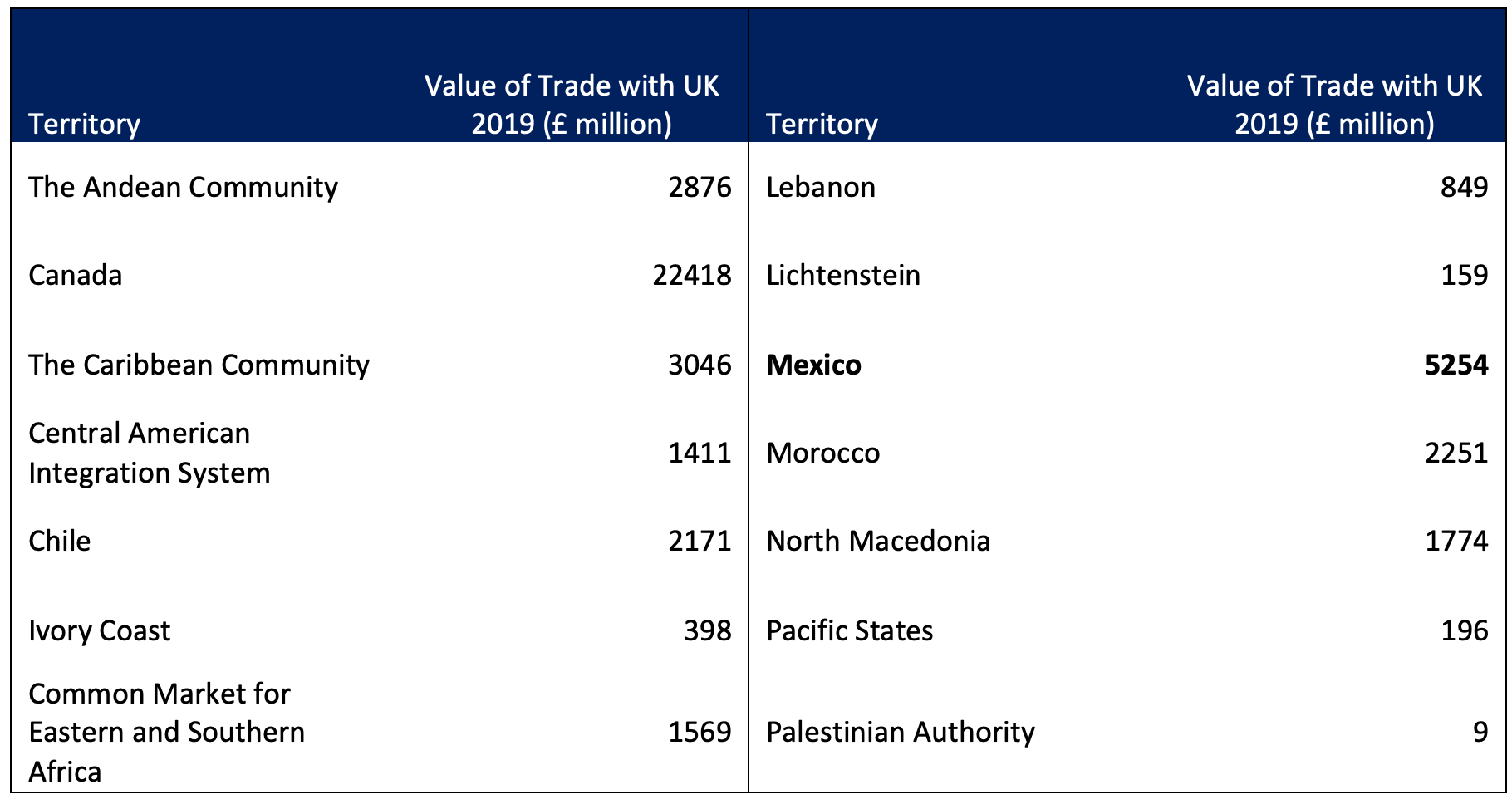 The list displays the prodigious activity of the Department of International Trade to get these 29 deals over the line. In just the last few weeks, the UK has signed agreements with five of the countries listed in the tables, highlighted in bold type.

If you are unaware of these positive developments relating to trade deals, it will not come as a surprise to us because media outlets seldom report positive news. The news you receive now is overshadowed by what hasn’t happened regarding a trade deal with the EU.

The significance of these agreements is not merely limited to the abstract numbers above and below. Each agreement provides certainty for UK exporters and importers, ensuring markets remain open, and goods and services from overseas are available for domestic consumption. 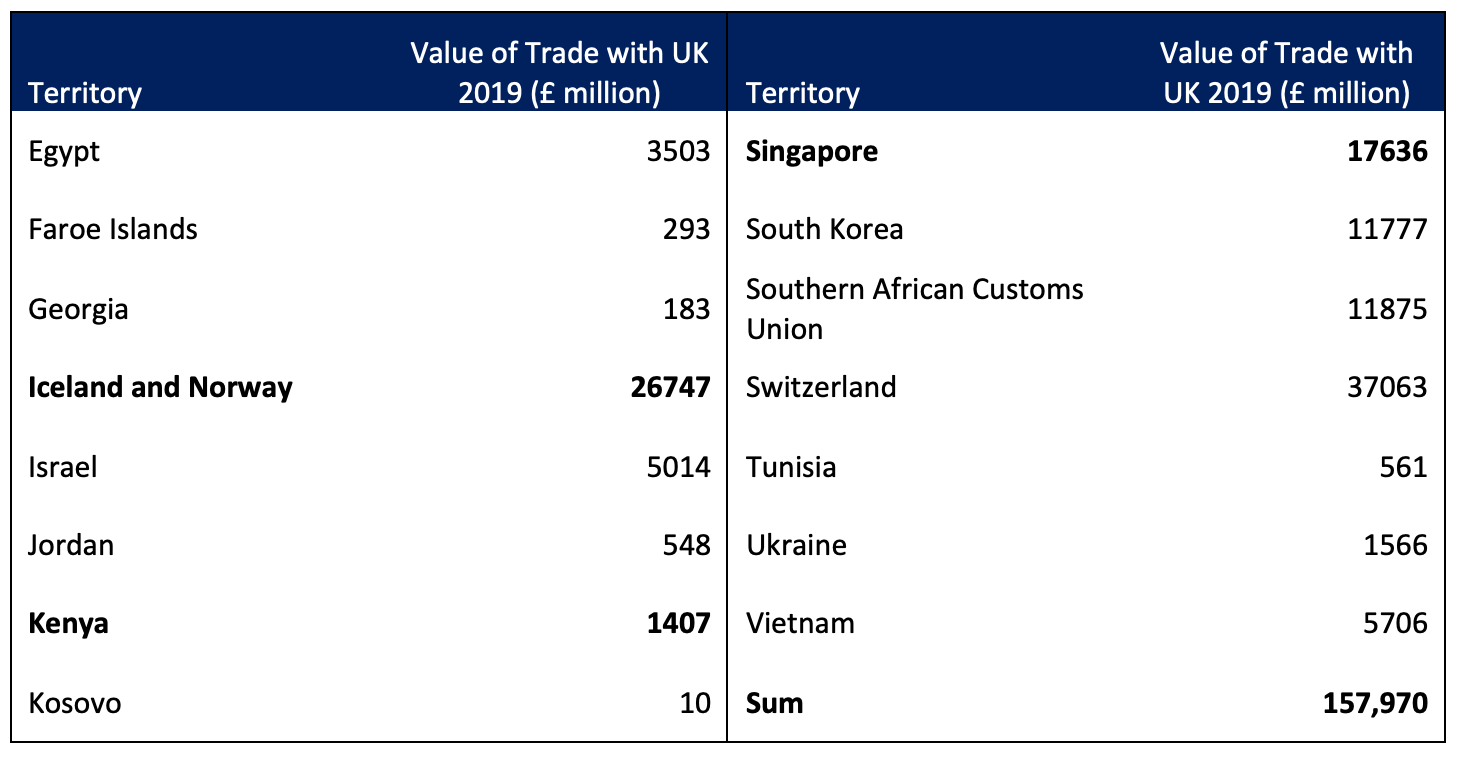 Sources: Office for National Statistics, Department for International Trade and the BBC, data as of the 31.12.2020

While these milestones are a worthy achievement, they do not represent a static, final state for the UK’s trading relationships. It is in the interests of all parties to each respective agreement to trade more with each other through further trade liberalisation.

One way of doing this is accession to multilateral trade agreements such as the Comprehensive and Progressive Tran- Pacific Partnership (the CPTPP). The CPTPP governs trade between 11 countries situated around the Pacific Rim, including Japan, Singapore, Canada, Mexico and Vietnam. The total combined value of the 11 members’ GDP is $13.5 trillion.

To put this number into context, a 5% share of trade with this bloc is roughly equivalent to the UK’s entire trade with Europe. Moreover, if the US under Biden decide to join the CPTPP, expansion will be enormous accelerating the bloc’s growth potential.

With the global economy’s centre of gravity moving eastwards, membership of the CPTPP represents a considerable prize, improving the access of UK businesses to the most economically dynamic region of the world.

Having reached agreements with five of the constituent members, the path to CPTPP accession is more straightforward. Likewise, with the bulk of the UK’s existing trade agreements now complete, the government can accelerate negotiations with countries under whom the EU never finalised a comprehensive FTA, such as the US.

At the time of writing the elephant in the room is still the UK’s future trading relationship with the EU. Representing 49% of the value of the UK’s total trade, and £668 billion, the EU is the single largest trading partner of the United Kingdom.

While complacency is not wise, it does appear both sides are moving closer to a compromise that will help guarantee some of the current trade flows. On Wednesday, European Commission President Ursula von der Leyen suggested issues around governance are primarily resolved, and movement had occurred on some other issues.

The next few days will be decisive. But whatever happens with EU trade negotiations, the activities and ambitions of the Department for International Trade show there is a world beyond Europe with whom the UK can trade.