UK Interest rates – Gently does it

Following a decision not to raise interest rates earlier this month, Mark Carney, governor of the Bank of England (BoE), addressed the Treasury Select Committee last week. The aim was to provide further clarity behind the central bank’s Monetary Policy Committee’s (MPC) interest rate policy decision. The Treasury Committee’s key role is to act in the public’s interest by carefully scrutinising the BoE’s actions.

Carney reaffirmed he and his colleagues will wait to see what future economic data points reveal about the state of the UK economy before increasing interest rates for the first time this year.

He made it clear that the MPC do not believe the underlying economy has deteriorated, but that poor first-quarter statistics and lower inflation rate gave rate-setters pause for thought. Carney specified that it was still the case that “interest rates are more likely to go up than not, but at a gentle rate”.

Since what is being described by the media as a communication misstep by Carney, calls for the BoE to publish a more explicit interest rate forecast, have grown. The suggestion being advanced is for the MPC to adopt a version of the US Federal Reserve’s (Fed) dot plot. The dot plots show each member’s views on where rates should be in the near term, as well their expectations for rates in the long-run.

Carney and his policy makers remain sceptical of the benefits of adopting such an approach. In his own defence he said he believes guidance given by the MPC is conditional and well understood by households and businesses. In his view, forward guidance produced in a format like the Fed’s creates the added risk of “pre-commitment”. “You’ve got a path, you feel more obliged, for reasons of credibility, to follow through”.

However, Gertjan Vlieghe is one MPC member in favour of being more explicit, adding on Tuesday that he still expects one or two rate hikes over the next three years.

Economic forecasters currently put a 36% chance of a hike in August. Probabilities of this sort ebb and flow with myriad data points, hence we will keep you informed of developments on this front in our subsequent commentary! 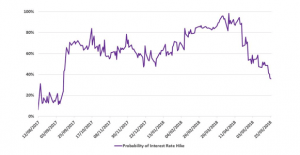