US Federal Reserve Bank (The Fed) – Inflation and Clear Communication 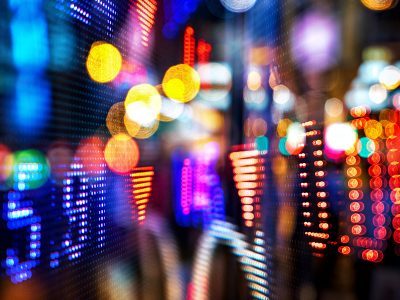 The US Federal Open Markets Committee meeting this week was keenly awaited. In the background bond yields had risen, largely in response to improving growth prospects, but also reflecting a shift in inflation talk. With governments and central banks intent on reflating economies some upward pressure on prices is a reasonable assumption, but whether inflation is likely to be sustained is hotly debated. We look at some pros and cons.

Even though yields are still at low levels relative to history, the increase in sovereign (government backed) bond yields over the course of the past six weeks is material and thus difficult to ignore.

Sovereign bonds are an integral part of the financial system and yield movements in either direction influence the performance of many other asset classes, from equities through to currency and derivative markets. 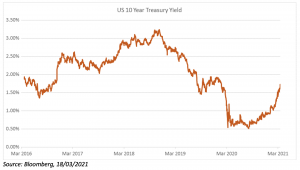 The sharp upward move in the US Treasury 10-year yield (also seen in UK 10-year Gilts) represents a return to pre Covid levels; a time when economies were experiencing high employment and improving growth. Historically, rising bond yields and steeper yield curves (higher long term yields relative to short term yields) are associated with economic improvement and not necessarily a harbinger of inflation to come.

While rising yields are not particularly favourable for fixed income investors (representing falling prices) they nevertheless act as a positive indicator for growth. Favourable in several ways including higher demand for goods, more jobs and improved wage prospects. 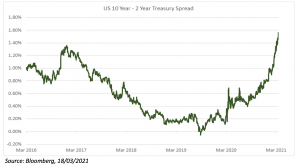 The change in the inflation narrative of only 6 months ago is now stark. We can see in the chart below, global internet searches for ‘inflation’ have increased significantly with the current level of 100 at its highest level over the past 10 years.

The reflation drive by governments, along with the ‘base effect’ and investor wariness of sustained inflation, present challenges for central banks globally. They are intent on keeping interest rates low and are worried that loose inflation talk will push yields too far, risking economic recovery.

Clarity of communication is crucial, but if Chairman Powell followed Alan Greenspan, a former chair of the Federal Reserve, we would be sunk. Mr Greenspan famously opined, ‘I know you think you understand what you thought I said, but I’m not sure you realize that what you heard is not what I meant’!

Looking Ahead – the US

Greenspan aside, Chairman Powell is a different character. He provided the US Federal Reserve bank assessment of financial conditions on Wednesday this week clearly highlighting an improving economic position from the last update given in December 2020.

In essence, growth is higher, unemployment lower and inflation, on their preferred PCE measure (Personal Consumption Expenditure), only marginally higher. Given this more upbeat assessment, crucial to markets is the direction of interest rates and how this is to be communicated. This is especially important at this point because policy is ultra-loose.

In 2011, the Federal Reserve introduced a chart affectionately known as the ‘dot plot’. According to the ‘dots’, policy will remain accommodative for the foreseeable future with most Fed officials expecting rates to be unchanged until the end of 2023. 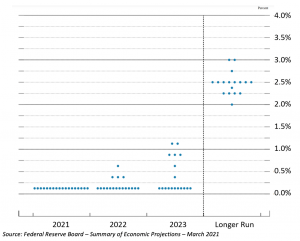 Chairman Powell stated that there will be no change in interest rate policy until full employment is reached and inflation is at 2% on a sustained basis. The message here is clear. The Federal Reserve will look through higher inflation triggered by the ‘base effect’ which they see as transitory. Employment is a crucial focus and Powell was again clear. Improvement needs to be achieved and happening in real time rather than something which is anticipated.

For now, rising inflation expectations, higher sovereign bond yields and steeper yield curves are being tempered by the Feds measured comments on inflation and favourable assessment of growth.

The Fed will need to keep reassuring markets that when shifts in inflation happen, they are transitory, policy will not shift from ultra-loose to tight; otherwise, investors will lose confidence and ‘test the Fed’.

If inflation expectations get ahead of the Fed, they will have to act decisively by buying more bonds to hold yields down rather than risk rising yields derailing growth.