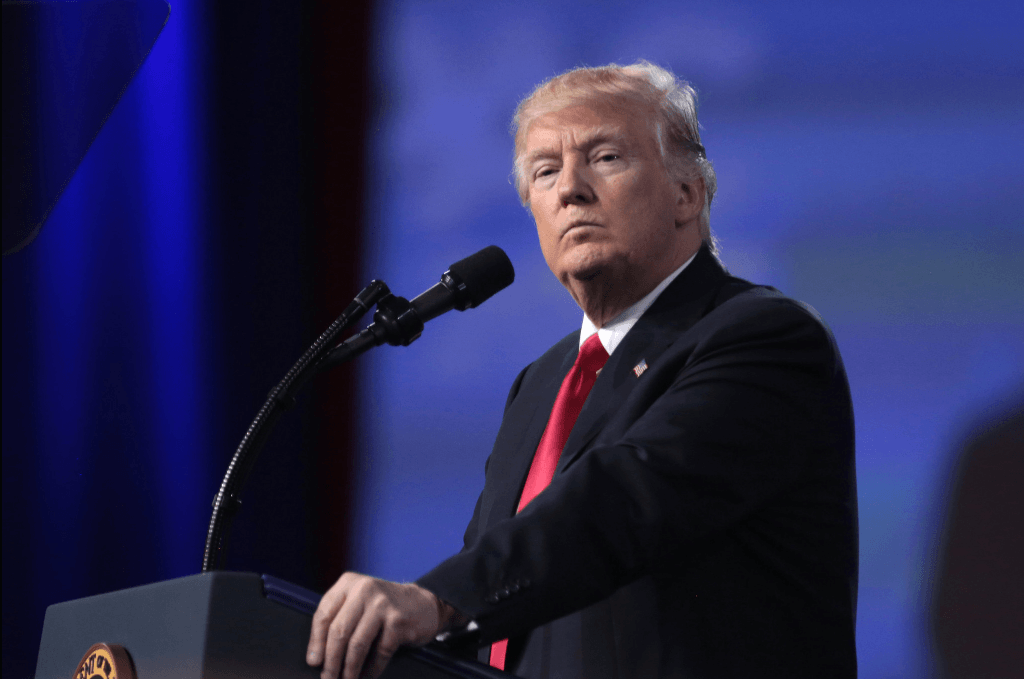 The longstanding enmity between the United States and Iran has once again boiled over. A US military drone strike which hit the transport of Qasem Soleimani, the second most powerful figure of the Iranian regime, elicited a forewarned response; Iran firing missiles at US-Iraqi air bases.

As with any geopolitical tension in the Middle-East, disruption to global oil supplies represent a threat and markets reacted quickly, with prices jumping by 8% to $71 per barrel. The analysis below contextualises the effects of the latest spat.

The areas shaded in grey denote periods of economic contraction.

However, the oil price needs to rise rapidly and sharply to cause problems for economies. For example, in 1973 the price of oil rose by 300% and in 2008 the price more than doubled from $80 to hit a peak of $164.50 before its grip was exerted. 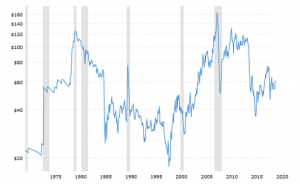 When looking at the staggering rises in the chart above, the $5 increase in the price of oil that occurred after the drone strike is very mild compared to history.Since then, and even after the Iran missile retaliation, the price has since subsided. On this basis the threat to global growth is very limited.

A cursory glance of Trump’s normally bellicose twitter feed in the aftermath of the airbase attack seems to indicate cooler heads have prevailed. 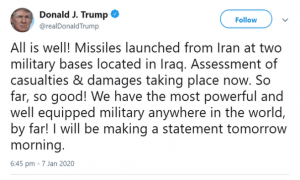 Trump has form when it comes to Iran. He is a long-standing critic of the nuclear deal negotiated by his predecessor and, perhaps with one eye on November’s Presidential election, called for Iran and the European signatories of the Obama era deal to come back to the negotiating table. This is a significant development and a much more conciliatory stance adopted by the US administration.

Aside from the changes posed by supply disruptions, secular changes are underway in the oil markets.

According to the US Energy Information Agency, the surplus supply of oil will be around 150,000 barrels per day by the end of 2020. Whilst this represents a narrowing of the gap relative to preceding years, the glut is more than enough to keep a lid on prices.

To put this another way, this daily over-supply of 150,000 barrels of oil is enough to produce just under 11 million litres of excess petrol per day. 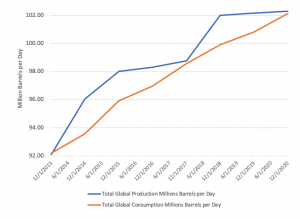 The remarkable rise and continued resilience of the US’ shale oil boom is without doubt the main supply-side driver. This new supply is capping price rises.

As can be seen in Graph 3 below, 2013/14 marks the point where US production ramps up. Such is the resilience of the shale boom that the US is now the world’s leading producer of oil and a net exporter of the commodity, a situation which would have been unthinkable a decade earlier. 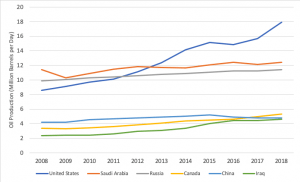 This explosion in supply has coincided with significant shifts in demand, which have been caused by three main reasons:

These paradigm shifts have not escaped the notice of Middle Eastern leaders. The diminishing importance of oil has initiated a series of attempts by the governments in the region to restructure their economies away from an over reliance on petrochemical production to other sectors. Even Saudi Arabia, with the second-largest oil reserves on the planet, has sought to diversify its economy, explaining the part floatation of Saudi Aramco last year to fund the ambitious plans of Crown Prince Mohammed bin Salman.

As economies expand, oil consumption will prevail at high levels. Shifts toward renewables and electric cars will take time to implement. Even with delays to adoption, the global glut of oil and the price compression that follows looks likely to continue while shale production is in the ascendency.

The most recent oil spike is unlikely to engender a period of economic contraction.

Both sides of the present dispute are walking back their rhetoric, indicating there is no appetite for a protracted conflict. The one caveat of course is that geopolitics knows no bounds in terms of its capacity to spring surprises.

On the dynamics of excess supply permeating the oil market over the last number of years, this looks set to continue; maintaining a range bound oil price for producers and consumers.