Global oil prices are turbulent. They are pushed and pulled by the forces of demand and supply which continue to shift in different ways. At the time of writing global Brent crude oil prices have experienced their third consecutive day of rising prices (up 1.73% during this time). In fact, oil prices have been in an upward trend throughout most of this year. 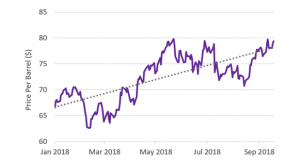 Factors which are influencing the oil price:

1. US production of shale oil; brought on new supply estimated at c11+m barrels per day (b/d) and forecast to go higher. The International Energy Administration (IEA) estimates that the US will become the largest oil producer by 2023.

2. OPEC cuts to production; in cooperation with Russia and other non-OPEC producers (a group referred to as OPEC +) production cuts occurred at a time when prices were falling. Restricting supply has been generally successful in pushing up prices.

3. The value of the dollar; all trade in oil is conducted in US dollars helping non-US oil producers increase revenue if the dollar is strong. However, recent reports suggest the EU, and some other nations, are looking at establishing contracts in prices other than dollars. This is being considered because of the threat of sanctions imposed by the US on countries trading with Iran.

4. Global demand for oil; in this regard demand from China is particularly influential. Meanwhile, Global GDP is firming thanks to US led economic growth inspired by Trump’s tax cuts.

In recent months a new factor has emerged to add to our list. This relates to President Trump’s announcement that in November 2018 he would reinstate US sanctions on Iran unless President Obama’s initiative is renegotiated. The original Obama deal he refers to was negotiated back in 2015 and was designed to curb Tehran’s nuclear activity. This was known as the Joint Comprehensive Plan of Action (JCPOA) – but referred to by Trump as ‘defective’.

Because of US policy interventions, Iranian production (world’s sixth largest producer) revived under the Obama plan is now faltering under Trump.

So, what’s going to happen next?

This coming Sunday (23rd) OPEC+ will meet in Algeria to discuss how to reallocate oil supplies to make up for Iran’s lost supply. In a recent tweet President Trump expressed his desire to reduce oil price pressures, urging OPEC nations to increase supply.

Trump’s intervention is timely. At an OPEC meeting in June talks were held to consider increasing production. It is also reported that Russia (second largest global crude oil producer), who have historically been difficult to negotiate with, are keen to open the taps. This makes sense for them because they are maximising beyond previous production highs i.e. Soviet Union (1991) at 11.36m b/d and 11.25m b/d in October 2016. Evidently, there is still more in the tap! So, Trump’s tweet to get prices down comes after initiatives which are already underway to increase supply. If prices go lower do not be surprised if you see another Trump tweet. It may look like this- ‘My instruction to get oil prices down worked! This is to the benefit of the world and US citizens’.

When OPEC met on Sunday, Brent crude climbed above eighty dollars a barrel after OPEC and its allies signaled less urgency to boost output despite U.S. pressure to temper prices.